The City of Warrenville, located approximately 30 miles west of the City of Chicago, is recognized as a small, hometown refuge nestled in the center of the dynamic and nationally recognized research and development corridor that runs through DuPage County, Illinois. It's a town where families can enjoy a safe, clean, aesthetic way of life and businesses benefit from a community that is open for business. Warrenville's location at the Winfield Road interchange on I-88 connects to a network of County roads, which provide easy access to both homes and businesses. Warrenville's population of 13,553 allows the City to maintain that small-town feel and still have the advantage of drawing upon a diversified tax base to ease the financial burden off of residential property owners. Warrenville's citizens are filled with a community spirit that breaks forth whenever there's a holiday or special event to celebrate or when the community has a need for volunteers. The median age of Warrenville residents is 37 years old with a median home value of $224,500. Warrenville is 5.5 square miles, with 42% residential land, 13% commercial land, 1% industrial land, 2% agricultural land, 4% institutional land, 19% transportation/other, 13% open space, and 6% undeveloped area.  For more information, please refer to the United States Census Bureau Profile and Quick Facts for Warrenville, and the Chicago Metropolitan Agency for Planning Warrenville Community Data Snapshot. 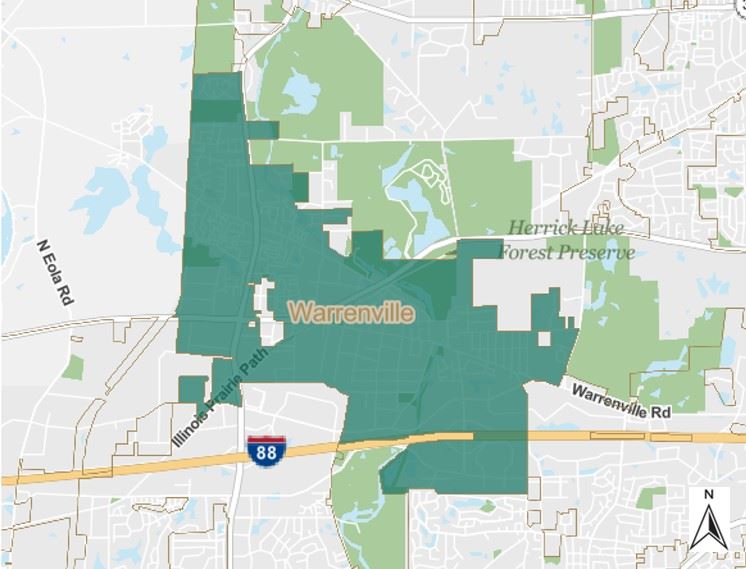 Settled in 1833 and incorporated in 1967, Warrenville has a history rich in the American tradition. Blazing the trails west from New York, Julius Warren came to this area with his family claiming land along the DuPage River. Carving out a niche in housing development, Julius helped new settlers by providing cut lumber for their homes as well as acting in other capacities including, surveyor, developer, land baron, mail carrier, census taker, spokesman, and innkeeper. Eventually earning the title of Colonel for his leadership in the community, Julius built an inn and tavern that became a popular gathering place for travelers and settlers alike. The town, taking on his namesake, continued to prosper with railroads and stagecoach lines crossing the community. The community remained a small, rural town for some time, surviving the toll of the Civil War. In 1967 with a population of 4,000 and five failed incorporation attempts, Warrenville finally incorporated with the Mayor/Council form of government.

Through the vision of past elected officials, Warrenville has been able to develop Cantera (meaning "quarry" and "hub of a wheel"), which has become the City's largest employer. The vision for Cantera was to be a "city within a city." Today, Warrenville mirrors the business and industrial success found throughout DuPage County and the western suburbs. The City has become a major part of the "Research and Development" corridor along Interstate 88 with headquarters for Exelon Nuclear. Additionally, the Cantera area offers a movie theater, family entertainment center/bowling alley, five hotels, full service banks, a fitness center, three prestigious daycare centers, numerous corporate offices, two residential complexes, many restaurants, and a large retail store. Thousands of new jobs have been made available to the area's highly skilled and educated workforce. As Warrenville reflects on this massive undertaking, it has seen itself grow into a serious contender in the competition for the attention of the corporate world. Warrenville has been able to expand and diversify its tax base, giving it the sound financial footing it needs for the future.

Warrenville residents experience a sense of safety throughout the community that is more than just awareness, but reality. The City's police force is comprised of highly trained officers who continually build upon their skills to deliver the best possible protection and public safety services as possible. Through many programs, residents build a relationship with the Police Department that helps keep their neighborhoods safe. Each year, the State of Illinois releases the Crime Index Totals, which compare criminal activity between calendar years. Among the departments listed (including municipalities, counties, and educational institutions), Warrenville's overall crime rate consistently ranks within the bottom half of the list, ranking lower for both violent crime and property crime. Through cooperative efforts between the Police Department and the citizens of Warrenville, the community has been able to maintain a low crime rate and an authentic sense of safety. Because this community is safe, many people enjoy living, working, and visiting the City of Warrenville.